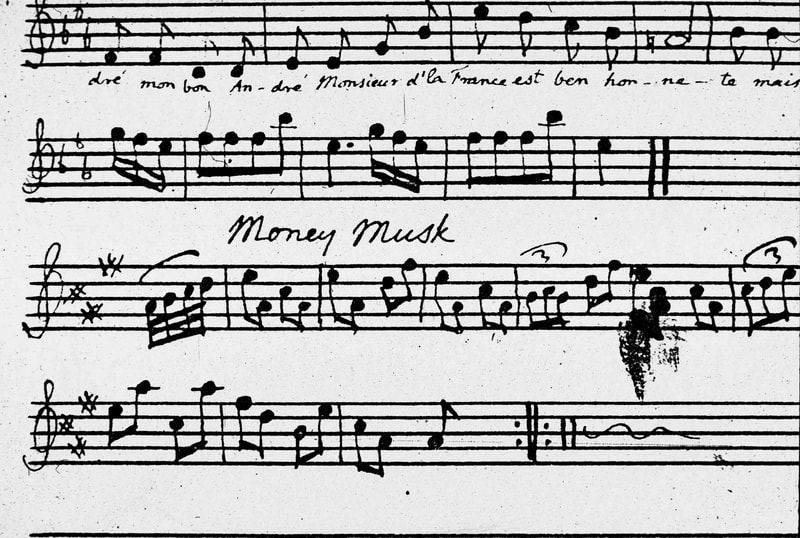 EXPANDING THE NARRATIVE
2020-2021 SEASON
The Jefferson Project: Virtual Fellows Forum
Livestream: Thursday, August 13 at 4pm
Performer-scholars David McCormick and Loren Ludwig ended their 2020 Fellowship at the International Center for Jefferson Studies with a Virtual Fellows Forum entitled Black Musicians in Jefferson's Virginia.
​
View this video on The Jefferson Project page.
Class: Tunes of Monticello
Sunday, October 18, 4-5pm
Though we will be unable to gather this winter for the Community Baroque Gathering, there will still be plenty of opportunities for virtual gathering and learning! Intermediate, advanced, and professional instrumentalists of all ages were invited to join violinist David McCormick for a fun and informative class exploring tunes played in and around Monticello by both free and enslaved musicians. Participants played along with the tunes and asked questions throughout this hour-long workshop.
Expanding the Narrative: Slave Songs and Spirituals as Early Music
Sunday, November 22 at 4pm
The Jefferson Project: Black Fiddlers of Monticello Walking Tour
Expanding the Narrative: Centering Black Music at Colonial Williamsburg

VIEW PREVIOUS SEASONS
David McCormick performs regularly on both violin and viele (medieval fiddle) and is in demand as an educator and arts leader. He is the founding Artistic Director of Early Music Access Project (EMAP), a rotating group of musicians bringing a wide range of early music to Charlottesville, Virginia and surrounding communities. Through EMAP, David was awarded a 2020 Fellowship with the Robert H. Smith International Center for Jefferson Studies, culminating in a series of concerts and online events exploring various aspects of music-making in Jefferson’s Virginia.

He is a founding member of Alkemie, a medieval ensemble based in New York City. With Alkemie, David has appeared at Indianapolis Early Music Festival, Music Before 1800, and Amherst Early Music Festival. He was also founding Artistic Director of Charlottesville-based baroque ensemble Three Notch’d Road, and has performed with Washington Bach Consort, Mountainside Baroque, North Carolina Baroque Orchestra, and as featured guest artist for the Bach-Handel Festival at Shenandoah University.

His degrees in music education and performance from Shenandoah University and Case Western Reserve University include specialized training in chamber music and historical performance. He is a 2017 recipient of Shenandoah Conservatory’s Rising Stars Alumni Award.

David’s instruments include a viele by Karl Dennis and violin by Jonathan Vacanti, with period bows by Louis Bégin, Michelle Speller, Ralph Ashmead, and H. F. Grabenstein.
Brian Kay is a modern-day troubadour. He is the first Artistic Leadership Fellow of Cleveland’s Baroque Orchestra Apollo's Fire and in 2019, he won a GRAMMY® Award for his work on their Songs of Orpheus recording. He has performed throughout the world at venues such as the National Concert Hall of Dublin, Belfast Castle (Ireland), Carnegie Hall, and the Kennedy Center. His live radio appearances include NPR, Baltimore's WYPR, Baltimore's 98ROCK, Boston's WGBH, and Cleveland's WCLV. He has recorded with record labels Avie and Sono Luminus and has appeared on more than 10 album releases. He is a multi-instrumentalist, songwriter, arranger, traditional and historical music specialist, poet, painter, and avid proponent of meditation.

​His recent projects include Meditations, an album of original songs in a modern style with a nostalgic flare, and Play, Music!, a one-man Shakespeare show which combines traditional music and theater (performed live at the Folger Theater in DC). He was recently chosen to collaborate with the UKs Early Folk Band.
Praised for her "alluring" performances and "easy virtuosity," soprano and dancer Elena Mullins has wide-ranging interests in the fields of early music and dance. As a performer of period chamber music she has appeared with The Newberry Consort, Three Notch’d Road, Les Délices, and Apollo’s Fire. She takes a scholarly interest in the performance practices of early repertoires, and co-founded the medieval music ensembles Alkemie and Trobár. She holds a DMA in Historical Performance Practice from Case Western Reserve University and a BA in Musical Arts from the Eastman School of Music. A passionate educator, Elena directs the Early Music Singers at CWRU, where she teaches historical dance, medieval music history, and early musical notation. She also has a voice studio at Cleveland State University.